On the Rain-Slick Precipice of Darkness: Episode One (PC)

Ok so I'm not sure if this counts as a seventh generation game as such, but it has only just been released and I did really enjoy playing it so I'm going to write about it.
Created by Mike 'Gabe' Krahulik and Jerry 'Tycho' Holkins from Penny Arcade, in conjunction with Hothead Games, On the Rain Slick Precipice of Darkness allows you to enter the 1920s world of New Arcadia. After a bit of a random intro sequence where your house is crushed by a giant robot, you get to join Tycho and Gabe as part of their Startling Detective agency in order to figure out just what is going on. Then you're off of on an adventure involving Tycho's niece Anne Claire (who has been recast from the comics as some sort of scientific/engineering genius), battling various hobos, robotic 'Fruit Fuckers', clowns, mime's and barber shop quartets with your trusty rake, exploring Desperation St, Hobo Alley and Pelican Bay on a quest that will ultimately involve destroying a god.

It's all a bit random and thoroughly enjoyable because of it. It reminded me of when I used to play Lucas Arts games like the Monkey Island series, and Grim Fandango, which is not surprising given Ron Gilbert's involvement in the project (he helped create the first two Monkey Island games). Partly this was due to the look and feel of it, but also because the game has a sense of humour. It's funny in that 'it makes you smile' kind of way because it treats you as someone who gets the joke. Maybe it helps to be familiar with the characters from the web-comic, or the tongue in cheek humour of Monkey Island but I'd like to think most people would appreciate this is not a serious adventure game. It seems that some of this will depend on whether you do get the in-jokes or not, which in turn depends on what knowledge you bring into the game in the first place. I wonder whether the role of humour has been examined with respect to games and learning? Is it really just another way of making things fun or does it have a more fundamental role to play?

Another familiar aspect of the game was it's player friendly design. It's very hard to die, but if you do the consequences are pretty much negligible. Plus, you can save whenever you like. The combat scenes may seem a little confusing at first, especially getting the hang of each character's special moves, but you quickly get used to the turn based combat and rolling of the 12 sided dice, and start to enjoy the amusing fight sequences that often ensue. Oh, and you can pick up various exploding items, power ups and downs during your travels that can aid you during a fight. 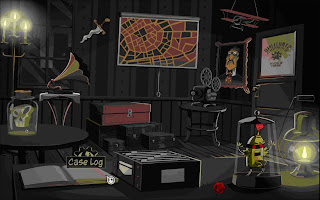 Then there is the Detective Agency screen where you can examine case logs, check your inventory and look at the files which contain info on pretty much everyone in the game.

The language in the game - fighting Fruit Fucker robots and looking for somewhere to live in the Shithole - and it's M rating makes it clear has not been aimed at a young audience. There are also pools of blood in certain areas, and a subplot involving the selling of hobo meat to a charity worker (which sounds a lot darker than it is and the hobos attacked us first - honest!). However, it's not supposed to be a disturbing game, so you also get mime's fight moves like 'pretending to throw a grenade' and clown's blood that looks like paint, which means you get fight scenes that end up looking like an over enthusiastic round of paintball. The humour might be a little dark in places, but I guess I quite like that.

Most of the time you do feel like you are running around inside a 1920s comic book world of robots, the occult, while meeting some very odd individuals in the process. The look and feel of the Penny Arcade comics are especially preserved by the polished cut scenes. But there were a few glitches that need addressing. There were silly things, like the fact one of my eyebrows always appeared in front of my hair in the cut scenes. There were also more annoying things like needing to click on an object three times before my character would actually go to it. Then there was the most annoying thing ever - during the final battle, if you called the cat (T. Kemper from the comic) to perform a supporting character attack, the game crashes and you have to start the battle again. So I hope they figure this sort of stuff out by the next installment.

See the other thing about the On the Rain Slick, is that it is an episodic game. That means it's short. Short enough, and entertaining enough, for me to finish within a few days. There is something about this that appeals to me as it means the game is broken down into distinct yet manageable chunks which I stand a chance of completing. However, it will probably end up costing me more as I will have to buy and download the rest of the episodes from Greenhouse Studios. Worst of all though, I now have to wait four months for episode two.

Posted by Jo Iacovides at 14:26 No comments: