First off, I need to say thanks to my mate Paul for sharing his PS3 with me over the last couple of weeks - I promise I will get one myself but it's going to have to wait till after Christmas...


So first, we played Trine (from Finnish developers Frozenbyte and you can also get it on PC) And it was good. A physics based action/platformer/puzzle game? That you can play with up to two other players?! Awesome!!! It looked pretty too (see video above). I have to admit not really caring about the storyline so much, but I did love the gameplay. Especially when we had to stop and think about what we needed to do next. I seemed to gravitate towards the thief most - I liked the fact she used arrows (so I didn't have to get too close to enemies) and I guess I just like jumping! I kind of left the wizardy stuff to the more experienced player as he seemed to have a good handle on when to do what but we would sometimes switch depending on what was going on. All in all, Trine did a brilliant jump of encouraging enjoyable coop play and I think it gave plenty of examples of problem solving and collaboration in action. My only issues with it were the occasional glitches that occurred when one of the characters goes off screen (similar to LBP) and the end. The last level really wasn't very difficult (in comparison to earlier ones!) and the n the game just ended - not really satisfying at all, but please don't let that put you off trying a pretty innovative game. 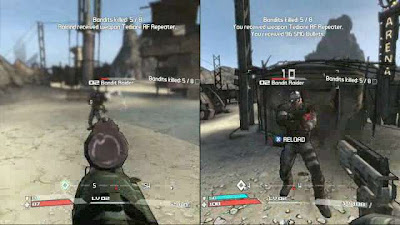 Then, there was Borderlands (see pic above). It's a first-person shooter (FPS) with role-playing game elements (RPG) set in a post-apocalyptic world full of bandits, guns, leftover cash in boxes and scary looking dog like creatures called skags. Paul likes it a lot but I'm not sure it's really my thing... This game made me realise I have a tendency to panic when something unexpected happens that threatens my character. It happened in Trine too - I ran away from a big scary skeleton when it first appeared, even though I was the warrior with the big sword! But when I panic in an FPS this means I lose all sense of spatial awareness (which isn't great to begin with) and start shooting all over the place. And then I die. So that's not much fun. Plus, I don't really care about guns and I don't like the feeling that I'm not very good at something. I also think my lack of progress levelling up and getting enough money to buy better (i.e. more powerful) weapons also added to my disatisfaction with the game. And god that robot guide at the start is annoying! My feelings are a little mixed on the game as a whole though because I did enjoy some of it. Like when I could see I was getting a little better - my aim did improve while I have to admit there was something really satisfying about nailing those head shots and also when I did eventually level up. I could even see myself picking up simple strategies like remembering to crouch down behind something when reloading and running backwards while shooting. Plus, playing with a more experienced FPS player made it a lot easier because it meant I also had someone to tell me what to do. Then there was the really hilarious moment when we heard growling, got scared and both ended up hiding in the same shed waiting for the skag to come to us! Though you may have had to have been there for that one... So yeah, mixed feelings about Borderlands. 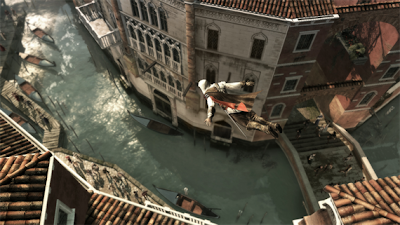 Finally there is Assassin's Creed II from Ubisoft. I really liked this - a lot more than Borderlands. Probably because the third person action-adventure genre is one I'm more comfortable with and maybe because I get to a lot more jumping in the form of free running around beautiful recreations of 15th Italy. While the avatar facial expressions are a little disconcerting (e.g. a lot of them seem kinda cross-eyed), the rest of the game is seriously stunning (see pic above). I found the storyline intriguing too, especially at the start where I ended up getting quite into the whole revenge plot. Though I have to say this doesn't seem to have sustained itself, as now I feel more impatient to just get on with the missions. And sometimes it wasn't clear how to get from a to b (or maybe we just haven't figured out the maps properly yet?). I did like the fighting here more too, though I have a feeling I prefer punching (i.e. hitting buttons repeatedly) and assassinating (killing someone without getting in a fight) than sword fighting (which seems to involve a mixture of timing and skill that I'm still getting the hang of). I have also learnt how to spell assassin properly ;) All in all though, it is a game I would actually like to spend some time playing on my own to how much I get into it, even though it was still fun to take turns at it.

So, that's a few more games than usual, and a lot more killing than I have done in a while! I don't think I've ever had much of a problem with violence in games - I know it's not real and of course I know it's not an appropriate to behave outside of the game - but I guess it is strange to realise I actually enjoy a lot of it. At least, when I do it well... So maybe, as Przylbylski et al. suggest (see here for a good summary), it's more about competence than violence? I think lack of competence may be why I don't like FPS games that much - I feel I have too much to get a handle on in terms of learning the controls, orienting myself spatially, comparing weapons I really don't know much about etc. Maybe I'd enjoy them more if I spend a little time practising but when there are so many other games I enjoy playing (and get to grips with quicker),I think something else will probably get priority. Until the next time a friend wants me to play an FPS anyway. I also liked the way that these recent experiences have all been quite social. When it wasn't a coop game, we took turns, and when we played Trine there were other mates around who were happy to watch us. Sharing does seem to make things more fun, or at least make things fun in a different way. And I think working together can also be quite satisfying though I imagine this might also depend on who you're playing with!

It's been good but I really am going to have to get my own "serious" console soon...

It not only looks good - it's set in a sort of rusty cute looking robot world - but manages to engage without a single word of dialogue being spoken (at least not as far I've played it). It's an independent point-and-click puzzle solving adventure without the tedious dialogue. Don't get me wrong, I love the narrative and humour of the Monkey Island games and I've even been playing the new episodic ones but it's the pretty much the same formula,though it is done well. But you can also get that wrong - like with A Vampyre Story. Czech designers Amanita Design have done something different here and have managed to communicate a storyline through the use of thought bubbles and (pretty cool) drawings alone. 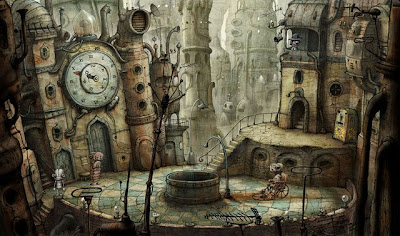 Not only that but they've included a really clever little mechanism for getting help within the game. I think I've mentioned this before, but I do use walkthroughs when I get stuck. There are just points where I don't have the patience to keep trying something, and if the information is out there I don't see it being massively different to asking a friend for some help. But, in order to access these walkthroughs (or tips or whatever) I have to leave the game and go online to find out what I need. And once I've caved and started looking at the walkthrough I then run the risk of ruining the gameplay by reading ahead so I don't have to come back for the next puzzle... However, in Machinarium, I have two other options. The first is to click on the light bulb on the far right to give you a hint for how to solve the puzzle. If that's not enough then you click on what looks like a locked journal of some kind. Now this will give the solution but (and here's the bit I really like) you have to play a somewhat boring mini-game to get to that solution. The reason I love this so much is because it means it stops me from ruining the game by easily accessing the walkthrough whenever I want - I have to decide whether it's worth playing the game first. So while the mini-game isn't very interesting (or very long for that matter) it makes me think twice about looking up the solution. But if I really am stuck, then I have a way to fix it without ever having to leave the game! Genius :-)

So I finally posted something about a games again (and not conference related!). I've been playing a few different things lately so I'm hoping there will be more to follow soon.
Posted by Jo Iacovides at 17:26 No comments: