An awful lot of gameplay and a few thoughts

I've been playing quite of different games lately and have been struck by a couple of things. The first concerns the fact that I haven't actually gotten round to finishing any of them. Which links in quite nicely with Leigh Alexander's article on "Completion Anxiety Disoder" where she considers the reasons why people don't seem to end up completing many of the games they actually have. She covers lots of practical reasons like not having enough time, and games being too difficult/easy or not interesting enough and then ends up suggesting a further reason; that players sometimes just don't want the game to end. Now it's a pretty interesting article in itself, but when you think about it in terms of how this relates to the educational potential of games it raises a couple of interesting issues. I mean lets assume we're talking about good games here, the ones that do get the challenges right and manage to maintain our interest, she's still basically saying that even when the motivation to play is there, people don't actually want to finish what they started. This would mean an end to the game-play experience and so instead it appears better to just avoid playing. So, if we're thinking about games as learning environments, then doesn't that mean that those playing won't get the 'complete' learning experience? Maybe this is only an issue if you think about learning in terms of delivering content and achieving outcomes? Or maybe it's just an odd claim to make, especially when you think about comparing it to not finishing a book or a film. In those cases, the only times I don't are when I'm not enjoying the experience - if I really enjoy it then I usually end up reading/watching it again, rather than trying to avoid the ending all together. 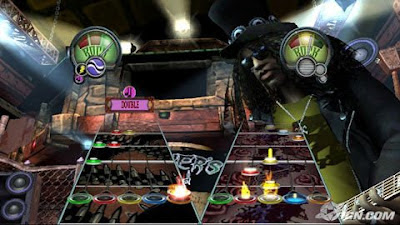 The other thing I've been thinking about has to do with playing Guitar Hero III and how frustrated I got with it when trying to beat Slash in a guitar battle and I couldn't. It really pissed me off. Which didn't exaclty help me when trying to concentrate on getting the notes right, so after suppressing the somewhat rock star urge to smash the tv with the Les Paul controller, I turned if off. Don't get me wrong, I really did enjoy playing and still do - I think it's been a while since I've really felt that sort pure sensation of 'flow' - but only when I'm good at it. It made me think though about all the things I've been reading about learning and fun. I kind of realised that I'd forgotten that just because you enjoy learning something doesn't mean that it's easy. I suppose the point of the story is that I did go back and beat Slash, which felt good, and so I'm still playing it. But if I want to be really good at Guitar Hero, it looks like I might actually need to take the practice mode seriously (where you can practice the songs you unlock outside of career mode). I just can't help feeling that if I'm going to do that, then maybe I'd be better off picking up the rather dusty bass guitar I got a couple of years ago and practice on that instead so I can learn to actually play along to the all songs I've been enjoying in the game.
Posted by Jo Iacovides at 18:32 2 comments:

I borrowed Lego Star Wars from Lovefilm a little while ago and have been really getting into it. I did have a slightly rocky start as it took me a little while to realise that the cantina I started in wasn't a proper level even though you could explore it and start fights with people. I eventually found the set of doors where you get to pick which part of the saga (i.e. episodes 1-6) you want to play. While not having a manual probably contributed to my initial confusion, it wasn't a problem in terms of the controls as I found it was very easy to pick up them up. One of my favourite discoveries was being able to use the z button to build stuff out of seemingly random bits of Lego, and finding out I could "use the force" on objects and characters with a blue glow around them. Plus, if your character has a sword you can swing the Wiimote to use it.

The initial appeal of the game I think for me was how it manages to combine two very familiar things in an entertaining way. Lego Star Wars looks good. I was walking past the Lego store in town the other day and I actually thougth about buying something. Plus, I know these films, especially the ones I watched as a kid, so I don't need to hear the dialogue to know what's going on in the story. It's far more enjoyable to see the Lego characters mumble and shrug while they act out classic scenes. Even better, you seem to get to be able to play all the characters at some point, unlocking more as you go on. While you can swap between a certain set in each level e.g. Obi Wan, Luke, C3PO and R2D2 in some of the earlier ones, once you've completed the challenges you can go back with any unlocked character and do the level again in free play mode. In fact, if you want to unlock hidden areas and collect everything it looks like you have to go through them all again. I wonder if this is enough incentive to do so?

That is one of the things that struck me about the game - it really feels like it's about collecting stuff. I mean of course there is the Star Wars plot and the associated challenges (rescue the girl, kill the baddies, save the world etc) but the game is really arranged around how much of what you collect and whether you have achieved "True Jedi" status on every level. I mean it was obvious from the start that you should collecting the large numbers of gold, silver and occasionaly blue studs - which are either lying around or you get from building/destroying/using the force on object. What is more interesting though is that I wanted to collect them, and collect them all if I could. I mean there are hundreds of these things, and when you destroy somethinng they fly out at you and you don't always have enough time to collect them all (which is a little annoying especially when they also spill over a ledge you can't jump down). At first I thought you needed them to buy things at the cantina. Then when I started episode one I noticed the bar at the top which started to fill up the more studs I collected. If you get enough you achieve "True Jedi" status. I still don't quite know what that means but you get a little tick at the end of the chapter if you achieve it. Td how many of the golden bricks, and mini-kits you have found and how many are left for you to discover. And I want them all, even though I'm not sure what happens if and when I manage to do so. Part of the incentive is that further aspects of the game will be unlocked in the process but I doubt that if I did manage to collect everything the outcome would be as exciting as I feel it should be. The main point though, is that the way the game has been designed means it's not just about getting to the end of each level, but it's also about exploring the entire game to unlock each section.

It's a little similar to playing Super Mario Galaxy and having the desire to collect all the star bits. I was talking to Will the other day and we agreed that we hate it when we're watching someone else play and they don't collect really obvious ones. I can't help thinking that this collecting aspect means Lego Star Wars comes across as more of platform game than an action adventure one. For example, in Zelda you do collect gems but the purpose of them is so you can buy other things that are useful to your adventures like better armour and weapons, or oil for your lantern. In contrast, in the Sonic and Mario games you collect gold (rings and coins respectively) but just to see how many you can get. Things like star bits, studs or gold coins aren't even power ups as such, at least not until you collect enough of them and get an extra life or something. Is that enough of an incentive to explain the drive to pick them all up? Something else seems to be going on here but I'm not sure what.
Posted by Jo Iacovides at 14:08 2 comments: