I finally finished Portal. It's a first person action/puzzle game, where an AI called GLaDOS challenges you to get through each of the test chambers through the use of a portal gun (which allows you to create a connection between two different locations in 3D space). Oh, and you are promised cake when you complete all the trials. I borrowed it ages ago from the library, and meant to complete a lot sooner but kept getting annoyed with certain puzzles and taking weeks off before trying them again. Now I’m well aware that a lot of people out there thought Portal was a piece of cake (pardon the pun…) and it only took them a day or something to get through the game. If anything, that’s an important part of why I just didn't give up on it entirely after the first time I got stuck – I wasn’t going to let this “easy” game beat me. But you see the problem wasn’t that I couldn’t solve the puzzles, it was that I had trouble putting my solutions in practice. I’ve never really played first-person shooters, I tend to panic when being shot at and I find them disorientating – like I never quite know where my feet are. So even though the game wasn’t about shooting, it was still about aiming and it turns out my aim sucks. And that’s a bit of a problem when you have to shoot holes in the ground while hurtling through the air and make sure you land in them. The result was that I had to keep trying what felt like the same thing again and again, till I eventually got it right. I went from getting so frustrated I gave up on the game for weeks to consulting walkthroughs to make sure I wasn’t wasting my time trying the wrong thing. 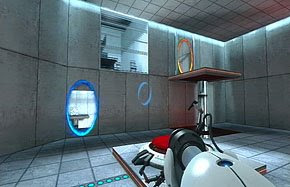 The whole experience reminded me of a quote I came across ages ago which defined madness as “doing the same thing over and over but expecting different results” (possibly by Albert Einstein or Benjamin Franklin). Games seem to stop being fun when they make you question your own sanity. And who wants to play something that makes you feel inept? This seems to fit in with Michael Abbott’s reasons for not being overly enthusiastic about Braid – frustration can really ruin whatever experience the designer intended you to have.

But why did I keep playing Portal? I think a major part of it is because I’d heard so much about the game and from friends who’d found it relatively easy and fun. Don’t get me wrong, I do think it’s a pretty clever game – I liked how it took a novel approach to the first person genre and the dark sense of humour that came with it. So maybe these things helped me to come back but I really think the main reason I persisted is that I wanted to be able to talk to people about the game without feeling like a failure for not having completed it. Tell you what though, when I finally got to the end, it felt pretty damn good. In that embarrassing punch the air with your fist and shout “Yes!!!” sort of way…

It’s been ages since my last entry because I’ve been pretty busy with my master’s dissertation (which isn’t quite finished yet). In my thesis, I’ve been using Gordon Calleja’s Digital Game Experience Model to talk about instances of play and learning, and I can’t help consider my whole experience with Portal in relation to it. The framework describes involvement along six different frames (affective, narrative, spatial, tactical, performative and shared) that the player engages in on both short and long term levels. Basically, during certain instances of game-play, I was having a lot of trouble actualising my strategies (tactical) which seriously reduced my sense of agency within the performative frame and subsequently decreased my affective involvement (in terms of enjoyment). When this happened I would give up but in the longer term I was motivated to come back by my desire to prove my competence to other players (shared) and, to a lesser extent, to get to the end of the game story (narrative). By looking at walkthroughs I was also engaging in the tactical and shared frames outside of the moment of game-play since I was checking my strategies and using an online resource created by the game playing community – as opposed to cheating ;)

Now these frames can be experienced at the same time, and to a greater or lesser extent at different points within the same game but when they have been internalised to the point where the player no longer has to pay conscious attention to them, it can result in an experience Calleja calls “incorporation”. This is defined as: “the subjective experience of inhabiting a virtual environment facilitated by the potential to act meaningfully within it while being present to others” (p. 219; Calleja, 2007). And that is what I experienced during the final level. After my initial rushed attempts, I was finally familiar enough with the spatial (the setting), tactical (I knew what I had to do) and performative (I could actually carry out what I wanted to do) frames while I was getting the affective (in terms of graphics and sound), narrative (in terms of the story progressing) and shared (in terms of GLaDOS’ reactions) feedback I needed to experience that deep sense of involvement that seems unique to video games. As Calleja rightfully points out, this is more than just feeling like physically “immersed” within the environment, it is also about feeling like your actions have meaningful consequences within an environment that responds to you. It’s a pretty powerful feeling, and that’s my excuse for punching the air and shouting “yes!!!” when it all worked out in the end.
Posted by Jo Iacovides at 12:54 2 comments: