After rearranging flights to avoid the air traffic control strike, I made it to Athens last week for the 5th European Conference of Game Based Learning. Not everyone was so lucky but I was pretty impressed with the conference organisers for managing to make sure the conference went ahead and that we all were looked after so well whilst we were there. It was a bit surreal having to avoid the crowds of protesters on the way to the conference venue and trying to make sure we didn't get caught up in any of the running battles with riot police on the way back... We did avoid the worst of it (which, on the first conference day involved ducking into a restaurant for a little while until the trouble outside died down!) with only piles of burnt rubbish around the city to remind of us of what was going on (see below). 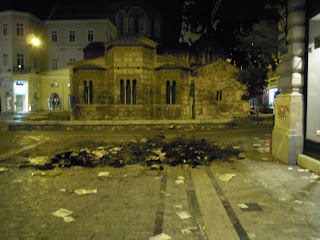 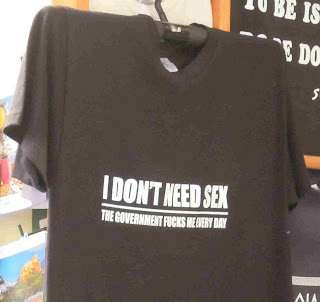 In terms of the conference itself, I am very glad I managed to make it as it was a great opportunity to meet up with people I had met before, like Alex Moseley from Leicester and Jantina Huizenga from Amsterdam and to talk to new people about games and research like Magnus Johansson and Kimmo Oksanen. In terms of the talks, one of the highlights came from Carlo Fabricatore from the University of Worcester, UK and Ximena Lopez from Initium Studios, Italy introducing the area of sustainability games - something I also know my OU friend Stefan Kreitmayer who I went to the conference with was very interested in (since he is working on creating collaborative games that deal with climate change issues). The presenters provided a good rationale for how games are able to support problem solving and systems thinking, and a review of some of the existing games you can find online. The review revealed that there is definitely room for improvement as there aren't a lot of games out there that consider sustainability in terms of environmental, economic and social issues, or that actually allow for emergent complexity. Further, a lot of these games seem to be directed at children so there it would be interesting to see more of them aimed at adults. While it wasn't the focus of the presentation, it also made me wonder how you might be able to evaluate this sort of systems thinking within a formal educational context.
Another talk I enjoyed, came from Matthew Jewell, a game designer from Rosetta Stone which produces language learning tools. He presented a game called Prospero which includes speech recognition software so players can practice their grammar (see below). This was pretty interesting because the game is part of a portal of flash games that are directed at different levels of language learning and it made me think a lot about intrinsic/extrinsic motivation and integrating game mechanics with learning. Prospero is a neat little game that gives players points for pronouncing the correct sentences and utilising a treasure hunting mechanic to allow players to choose a task, which also provides further reward to the player. I think you can also compete with other players if you want. On the surface, this seems to go against a lot of what is discussed in the literature (the importance of intrinsic motivators etc) but in reality I can see how it's a really effective way to get players to practice what is a essentially a dull task (learning correct grammar) in order to become proficient at it. Further, the only way to progress in the game is to pronounce phrases accurately and I can see how variable reward (in the form of finding treasure) can provide help provide the sort of "stickiness" that Matthew was aiming to achieve. And at this level of learning at least, it does seem like it will help make the player more likely to practice. I'm not entirely sure how Rosetta Stone evaluate their products (or if they want to share that info!) while I'd be curious to see some of the other games in the portal and how they work, especially since the Rosetta blog suggests: "once you gain a little more confidence, you can progress to one of our conversational games, like Identi or Chatonium." I guess I'm curious about whether the gaming mechanisms evolve along with the learning complexity. In general, I really enjoyed talking with Matthew about games as he pointed out things like how casual games can be ignored by game-based learning research in favour of more complex solutions and he made me think about how maybe the lines between the extrinsic and intrinsic motivation are more blurred than we sometimes like to think! 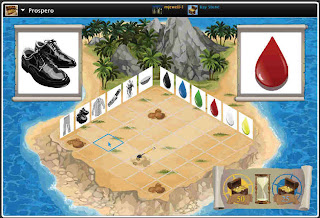 My own session on breakdowns and breakthroughs experienced during game-play went ok too, and seemed to generate some interest. I'm actually going to do a seperate blog post on this as I'd like to introduce my research a bit more as I'm realising that it's not something I've been too explicit about on this blog. I've recently taken up some part time work on a project about digital scholarship which has made me think more about openess and what that might mean so I think it will be interesting to be actually put some of my work out there, especially in relation to what I have presented at recent conferences. In general though, the questions I got were interesting and gave me plenty to think about in terms of writing up my thesis.
There were a couple of other interesting talks, such as Lorenzo Romeo's talk on reflective flow, which got me thinking about whether games really do support experiential learning or whether we tend to use the term to describe active learning i.e. learning by doing - can learning in the context of game-play really be seen as a "direct encounter with the phenomenon being studied"? (this relates a little to conversations I've had with Rob Farrow about how embodiment relates to games); and Colin Lemmon giving a really interesting insight into all the problems designers face when trying to develop and get funding for serious game applications. The keynotes also provided food for thought with Nikolaos Avouris providing an useful introduction into the use of games in museum contexts (and how their is really a lot of improvement here in terms of the educational value they actually provide and tapping into more social  and mobile experiences - e.g. contrast Play with the Frieze, where you have to match pairs of pictures of the frieze at the new Acropolis Museum; with Ghost of a Chance at the Smithsonian American Art Museum). Sara de Freitas also gave a talk on the Gamification of Life which provided an interesting overview into the work the Serious Games Insitute is doing and the challenges of doing work in this area. Unfortunately, the conference was a bit pressed for time at this point so it was a bit of whirlwind tour but I would have liked to have heard more about the evaluations carried out. Also, I'm a little confused about her use of the term gamification as it seemed to be used as way of referring to anything involving games (as opposed to the DiGRA gamification session definition of using game-elements in non-game contexts i.e. not whole games) so it would have been interesting to find out why she applied the term to the work that she discussed.
All in all, it was an interesting couple of days and I really benefitted from the chance to talk to other researchers about games and games research. I think I did see a bit more of the questioning I felt wasn't there at ECGBL 2008, though it was a shame there were quite a few people that couldn't make it so - depsite the fantastic efforts of the organisers, it wasn't quite the experience it could have been. I also think that the conference would benefit from tightening up the review process a little (perhaps by adding an additional reviewer?) as there were a couple of things that surprised me a little in the presentations e.g. the use of the somewhat outdated and unpopular term "edutainment" (though as in any international conference, translation might be an issue here). I'm also very glad I got to see Athens after the protests as the lively and historically amazing city that it is so will leave with a photo of the Acropolis from my hotel room :-) 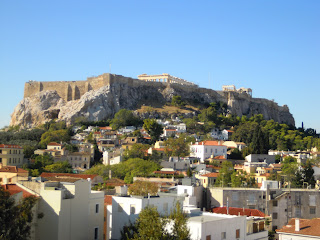