So like I said I was in Nottingham last week for a couple of things, as well as the ITAG conference there was the GameCity 5. I went along last year too, so had a better idea what to expect this time. The festival had the usual marquee in Market Square though one half of the arena was devoted to EA and the Nottingham Primary Care Trust who partnered up to "bring you the Best Health club in the WORLD" (according to the GameCity website anyway). That was a bit weird to be honest - games promoting fitness... still not sure I've got my head around all that though that doesn't mean I think it's a bad thing, just different. The other side was much closer to home though, as it was full of couches and TVs so people could comfortably try out different games: 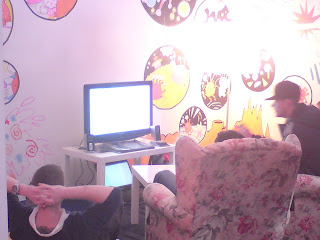 Like the new Lego Universe - a massively multiplayer experience that has just been launched. It looked cute and funny, though I got the impression it's being aimed at younger players. 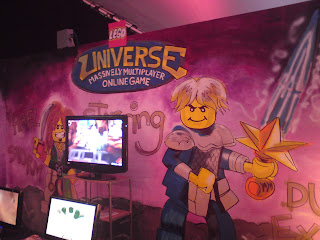 And Confetti Carnival, developed by Spiky Snail which was a lot of fun. The designers were kind enough to answer my questions about the platform and release date - apparently while they would like it to be multi-platform, that really depends on what deal they get, and it should be ready for release by the second half of 2011.

The main highlight of the festival for me though was hearing Jonathan Blow do a sort of directors commentary on Braid: 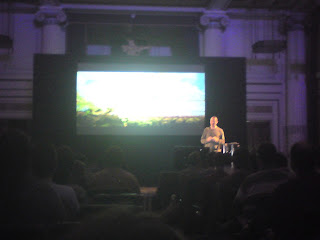 It was seriously interesting, not just because it made me want to give Braid another go but because of what he said about game design. He first demoed the original prototype which he threw together in about 8 days to show his friends. The final game took about three years and looks a lot better, but it was quite interesting to see a lot of the main concepts (including the time reversal mechanic) in what was essentially a retro Marioesque platformer with crude graphics. Jonathan pretty much played through most of the game, explaining each world, though it was clear he wasn't going to say very much about the story. I think in some ways what the story means came across as something he didn't know how to verbalise, rather than something he was just refusing to talk about.  And like most things, you can't control how people respond to what you've created.

I was in Nottingham last week for a couple of things, including the Interactive Technologies and Games: Education, Health and Games conference. Unfortunately I ended up missing the first day due to a minor mishap, but was glad to make the second half of the conference. It took place in Nottingham Trent's new conference centre - which was a really cool venue, apart from trying to figure out the lifts, and the random (false) fire alarm that went off towards the end of lunch.

The day started with a keynote speech from Gerard Jones. He's a comic book author and write who wrote "Killing Monsters: Why Children need Fantasy, Super heroes, and Make-Believe Violence" which I read a while ago and would recommend to anyone worried about letting their kids play with toy guns and/or video games. His talk had very little to do with the book, in fact he wanted to talk about inclusion and how games are not isolating but are actually quite social. He then went on to talk about games can help people feel a sense of achievement through providing different ways of being good at something. He also pointed out that there is more of an emphasis now on games being designed for all, though the market itself seems to be a rapidly shifting one. I think his main message was that games are an arena with the potential for us all to move into from different angles, but by his own admission the talk was more a reflection on the sorts of things he'd been thinking about, as opposed to something more conclusive. I think at one point he also said something about how games can help people be good at something (like socialising) that they wouldn't be that good at in the real world - which really didn't sound that positive or inclusive since it sort of implies that games are for people with poor social skills...

The next talk was from Andrea Lewis, as Masters student at Nottingham Trent, who carried out a thematic analysis on the motivation behind female casual game-play. I would have liked a little more on methods but 20 minutes isn't exactly a generous slot when you've got a lot of material to get through! Two main things came out of this for me; one, it brought up the casual/hardcore thing again and made it clear it really isn't can't be just about the type of game or how long you play for and two, I wonder whether men and women's motivations for playing games is that different? I know there is a gender divide when it comes to the types of games men and women seem to prefer playing, but it's something I've not really made a point of addressing in my own research. I think that's because my main study involves the use of multiple case studies, I'm really not trying to make any gender based generalisations on a set of cases that should be able to stand on their own.

Other highlights of the day include Wee-Hoe Tan talking about how game designers and subject experts really should collaborate more (and mentioning that commercial game designers tend to look down on educational game designers for reducing the "essence" of games!); James Lewis talking about the Novint Falcon and how it can be used alongside games to promote stroke rehabilitation (though he also raised a valid point about whether you'd even want to replace a social situation within a stroke club that encourages movement e.g. chess, with a single player activity such as using the Novint Falcon); and Maria Saridaki talking about motivation in the context of people with intellectual difficulties in terms of how important it is to consider the educational environment itself and the motivation of the teachers themselves.

There was some accessibility issues raised, the most surprising of which to me concerned Facebook. Sarah Lewthwaite, a PhD student from the LSRI spoke about examining the social role Facebook plays in the life university students who identify as disabled. So while she discussed one student who suffered from depression and her use of a puppy application to connect with her friends from home, she also noted that for those with visual difficulties Facebook isn't exactly accessible, especially when it comes to it's third party applications. I guess what I hadn't considered before is that not being able to view these things as a new student can put you at a disadvantage from other students who can - to put it in Bourdieu's terms (which she did) it can lead to having less social capital, and generally feeling a bit left out. Another thing that surprised me, again because I've never really thought about it, came out of Sarah Pople's talk on how schools and universities can work together to develop games for students with disabilities. I remembered some of the games she mentioned from being at the conference last year and was pleased to see that again some of the students had come along to demo the games during the talk. But what I hadn't realised was that, due to the nature of their disabilities, only 16 out of 140 students were actually able to play these games. Apparently only 10% of students at the school can read and write while others need special controllers and switches to operate computers. It seems even more essential in this case that developers work with schools in order to find out how they can really make games accessible to all.

There were quite a few other interesting talks but I think that about covers my main highlights. ITAG isn't a very big conference but it is very friendly and it's always good to hear the different ways in which games and technology can make people's lives better. Thanks to David Brown and colleagues for putting it all together.
Posted by Jo Iacovides at 17:51 No comments: