I'm on a break for the holidays so thought it was about time I wrote something about what I've been playing over the last couple of months. I've left Spore off this list as I've only recently gotten in to playing it again and want to post about it in more depth later on.

Since September, I've managed to complete two games. The first is episode two of the Penny Arcade Adventures: On the Rain-Slick Precipice of Darkness (PC version) developed by Hothead Games. You join Gabe and Tycho again on their quest to find the giant robot destroying New Arcadia (and which destroyed your house in the first episode). Basically, it was more of the same as the first episode but I'm not convinced it was quite as fun. At least in terms of the turn-based combat, I got more out of the mimed attacks and colourful clown blood spatter, than I did of beating up rich snobs and mental patients (cue ethical discussion here...). I did enjoy it though, because of the humour that comes with it and I think I quite like the episodic format - it doesn't take more than a few hours to complete. I also think I'm driven more to complete games like this by a desire to get to the end of the story than by a sense of challenge, as I'm not sure I want to go back and do it all over again in "insane mode". I mean, you'd have to promise something a lot more than the same thing again but a hell of a lot harder. 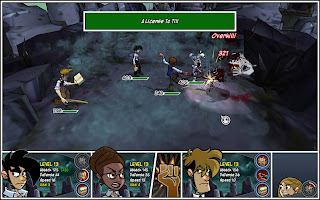 The second game I completed was Lost Winds, developed by Frontier Developments for the Wii. Available on WiiWare (as opposed to in shops) where you play Toku, a young boy who has to save his homeland from the elemental spirit Balasaar with the help of the Wind spirit Enril. You control his movements with the nun-chuck but also use the Wiimote to control the wind in order to help Toku jump higher and further. Apparently a second player can use an additional Wiimote to help Toku jump further but not higher (similar to the co-op mode in Super Mario Galaxy) but I haven't tried it. I really enjoyed Lost Winds, again because I could complete it in a few hours (as opposed to weeks) and also because it is one of the few games I've come across that actually integrates how you use the Wiimote into the story and gameplay. It's also easy to pick up and very pretty. It might be a little too short (I think it might be best to think of it as an episodic game, as a sequel seems to be in the works) and it could definitely have benefited from a map, or some sort of spatial representation of where you were and where you could go, since I seemed to spend a fair bit of time retracing my steps. If you have a Wii though, I would definitely recommend downloading it and it is only 1000 points (only £7). 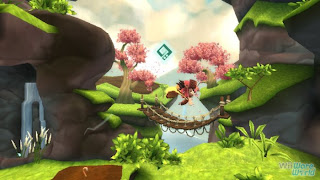 I've also been playing a point-and-click adventure game called A Vampyre Story about an opera singing vampire named Mona who was kidnapped and turned into a vampire by the rather pathetic Shrowdy von Kieffer and is now trying to escape back to Paris. Developed by Crimson Cow I had high hopes for this as I'm a big fan of the genre and while it looks pretty, I'm finding the characters a little annoying, especially Mona's sidekick Froderick the bat, and the dialogue you have to sit through can be a little tedious (and just isn't that funny). I'm not sure the interface works that well either and in general I'm just not enjoying it as much as I thought I would. I think it might go on the back burner for a bit while I play Spore... 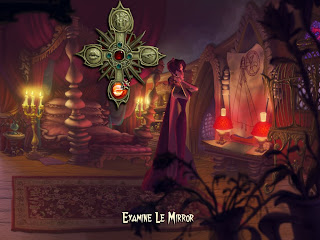 Lastly, there is World of Goo developed by independent games studio 2D-Boy. I played the PC demo a while back but have been waiting for it to be released on WiiWare in - which should be soon - to see what it's like on the Wii. I absolutely loved this game. Described as a puzzle/construction game by it's developers, the player controls balls of goo which you can attach in different ways to form bridges and structures so the remaining goo can exit the pipe (a bit like Lemmings). It's not only easy to learn, but also clever and engaging. But if I have to wait too much longer I think I'll end up with the PC version. 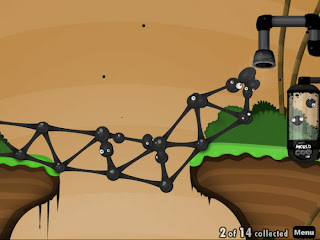 Ok, think that's it for now at least!

Ok, so this isn't the 'games I've been playing' roundup I've been meaning to do but I've got a rotten cold at the moment and so that's going to wait until my head is a little less foggy.

But a friend of mine did send me a link today for a pretty cool game that I thought was worth sharing:

In addition to Echochrome and World of Goo there does seem to be a fair few simple yet elegant physics types games out there at the moment. They seem to engage people very much in a problem solving way i.e. on a tactical and spatial level and with less emphasis on have to hit the right buttons at precisely the right time. I guess, along with my masters project and the reading I've been doing, I've been thinking a lot about the different ways in which games engage and how these can be related to learning. The question "how can digital games support learning?" now seems ridiculously vague. It would be better to consider how specific types of games (and the way they involve players) result in specific forms of learning before even beginning to consider how best to use digital games within formal educational environments.
Posted by Jo Iacovides at 17:02 No comments: