Today's gaming ethusiast is older than you might think, finds OU research student.

My first press release on my PhD work, with a bit of a Christmas hook :-)
Posted by Jo Iacovides at 13:41 2 comments:

Email ThisBlogThis!Share to TwitterShare to FacebookShare to Pinterest
Labels: research

Being more open about my research

As I mentioned in the last post, my recent part-time work where I've been looking at digital scholarship at the OU, has got me thinking about what it might mean to be a scholar in the digital age and how openness can be a part of that. I have touched upon aspects of my research in this blog, but mostly I tend to use it as a way to reflect about my own gaming experiences and as a way to keep track of my thoughts about different events I go to. As I was writing up the post about ECGBL 2011, I realised that I really did want to say more about what I had been doing and this might be quite a useful thing to do, especially as I'm currently writing up my PhD thesis.
So, in terms of what I have done my research, consists of three phases. Phase one included a conceptual overview of different frameworks of engagement and motivation and a set of interviews with a range of different games players (from casual to hardcore). This led to the development of a set of learning categories, which I presented at EARLI this year (extended abstract) where basically I found that people learn through games in three different ways: through play, through others and through external resources; and on three different levels: on a game level, skill level and personal level. The personal level refers to instances such as picking up general knowledge but also in terms of people mentioning things like developing perseverance and viewing game characters as role models - possibly an area that has received the least amount of attention in game studies though this is likely due to the difficulty of assessing it! I also developed a set of themes that relate to a concept Mia Consalvo calls gaming capital (in turn based upon Bourdieu's notions of capital), which players gain not just by being good at games but in terms of being knowledgeable about them. These themes were: competence, knowledge, community and identity. We published a journal article earlier this year, based on work I presented and GBL 2010, which introduces some of these concepts and outlines my position on engagement and motivation in terms of thinking about them as forms of involvement.
Phase two consisted of a set of case studies I carried out where I examined people playing games on a micro and macro level (i.e. analysing instances of play and wider involvement with players and resources). This consisted of eight case studies, again with a mix of players, some who identified as gamers and some who did not. At DiGRA, I presented the methods I adopted (which you can access here) while at ECGBL I focused on analysing game-play through analysing breakdowns and breakthroughs in terms of what they can tell us about learning and involvement in games (which you can find on ORO here). Whilst at ECGBL, I was asked about the use of AAA games within the case studies - I didn't choose to focus on these but the focus on consoles in the lab setup (see picture below) meant I was much less likely to look at more independent games like Braid or low budget games like Farmville. However, some of the observation sessions did involve more casual games like Big Brain Academy and some less familiar titles like Flower (which was produced by an indie developer) and Endless Ocean 2. Plus, I did try and tap into the different types of games people play by asking them to keep a diary of their experiences outside of the lab, though admittedly there is less detailed information about these in terms of considering breakdowns and breakthroughs. I was also asked about the types of players that took part but pointed out I was more interested in tapping into a range of experience by getting older/younger, male/female, casual players/gamers to take part in order to maximise the differences between cases, than in considering whether someone was an "explorer" or not. I probably should have been more explicit about how I was trying to contribute to a general theory of how involvement and learning relate to each other rather than trying to make statistical generalisations about how involvement and learning might differ with respect to player type/motivation and genre. That said, as I'm writing up, I will need to point out that in terms of the observation sessions at least, any claims I will make will relate to games where players control some sort of avatar and navigate through virtual environments (with Big Brain Academy as the only exception). 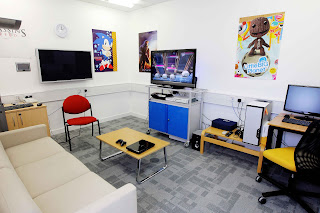 Another question I got asked at ECGBL was about how I actually identified breakdowns and breakthroughs with respect to action, understanding and involvement. In terms of action, this is pretty simple as strategies were either effective or not, while understanding was also relatively easy as this was something pretty clear from the post-play interviews (though occasionally breakthroughs would be more gradual). I also pointed out that I collected an awful lot of data so I was primarily focused on major issues, rather than a fine grained analysis of everything. However, involvement was definitely harder to identify, especially in terms of breakthroughs as it wasn't always clear exactly when these occurred and sometimes it may have been a much more gradual process. It seemed a lot easier to identify when flow breaks down for instance, than when it is actually happening. During the analysis, I ended up identifying involvement in affective terms i.e. with respect to evidence of negative emotion (where boredom or frustration would indicate a breakdown) and positive emotion (where enjoyment or satisfaction would indicate a breakthrough). On reflection though, I'm not sure the concept of breakthroughs could be applied as easily to involvement. This is something I discuss further in the thesis, while I also consider the relationship between the different types of breakdowns and breakthroughs. Note: I also collected a range of physiological data during the observation sessions - initially in the hopes it would help us identify different types of breaks but it turned out to be less useful than we hoped as it too difficult to interpret under these circumstances (i.e. because we didn't use a controlled experimental set up).

Finally, I was asked about how my work related to education - but since my focus is on learning that occurs when we are involved in games we play outside of formal educational contexts, I can't actually say an awful lot about that. However, I do think that building a better understanding what happens when we play the games that we do can help us design more involving educational games that are able to support effective learning e.g. by suggesting that it is important to avoid situations where progress can occur without being accompanied by understanding breakthroughs. So I think my work will have implications for education but the a more significant contribution will be to the area of informal learning.

One thing I didn't discuss at ECGBL that came out of the analysis of the diaries I asked players to keep (over a three week period), was that there wasn't really a lot of interaction with the wider gaming community. Sure, participants reported talking to other people about games and using various online resources to keep up to date with news and developments; while occasionally, they consulted guides or walkthroughs, but there really wasn't a whole lot going on in terms of people contributing to these sorts of things. Further, it seemed that the participants who identified as gamers were the ones who reported using resources more frequently than the non-gamers. As this was a small set of case studies, this led to us thinking about investigating this sort of thing on a wider scale through the use of a survey; in the final phase of my PhD.

It seemed important to consider this sort of macro level involvement in more detail, and how it might relate to identity and learning, as it links in to a lot of the stuff James Paul Gee discusses when he talks about games and learning; in particular with respect to semiotic domains and affinity groups/spaces. I'm not going to go into the results in detail (as that's a whole chapter's worth of discussion!) but it does seem that players who identify as hardcore are not only likely to interact with wider range of resources but that they also more likely to say they have learnt from their gaming experiences. This is significant, because while Gee talks about the importance of identity in learning, he discusses this is terms of a player reflecting on their personal identity in relationship to their avatar rather than in terms of how they identify as a gamer. We just got a short view points paper accepted by Learning, Media and Technology on the preliminary analysis of the questionnaire, so I'm quite looking forward to writing up the main analysis after I submit.

I'm not sure how coherant that all is and I still need to link everything so I can sum up how involvement and learning come together on a micro and macro level, but it's been interesting trying to sum up what I've been doing over the last few years! Now just need to get on with finishing off the thesis...

Posted by Jo Iacovides at 18:26 No comments: