Last week I was in Seoul for CHI 2015, where overall UCLIC had a really good year and some great talks. With respect to my own work, I presented my paper with Anna Cox on "Moving Beyond Fun: Evaluating Serious Experience in Digital Games" on how we evaluated the games that were entered into our persuasive game design competition for students. Not much work has been done around this sort of thing, so we developed a method that involved expert judging, play-testing with interviews and post-play emails to establish which of the entries was most likely to lead to reflection on human error and blame culture within the context of healthcare. In the paper we argue that our methods allowed for a consideration of domain relevance and potential to lead to reflection (expert judging), gameplay experience and engagement with competition themes (play-testing and interviews) and longer term resonance (follow-up emails). While you can find the games entered into the competition here, the winner, Nurse's Dilemma serves as a great example of how a one-off uncomfortable gaming experience can lead to reflection on previously taken for granted assumptions about responsibility and blame within healthcare.

I also went to the workshop on diverse perspectives on players which was a great opportunity to talk about player research, methods in the area (including case studies), and challenges the area is facing, such as ecological validity, conceptions of gameplay, plus the need to operationalise key terms and to agree on definitions! We ended up drawing a road map of our discussions - see pic below, where we really did end up with karaoke :-) 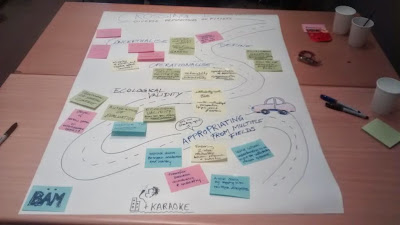 There were quite a few games sessions at CHI, though I was a little annoyed that one of them clashed with the session I was in, plus I missed the alt.chi talk on Games Against Health but I guess that just means there is more to add to my reading list! I'm also going to have to add the work-in-progress paper It Was Sad But Still Good: Gratifications of Emotionally Moving Game Experiences by Julia Ayumi Bopp and colleagues as it sounds intriguing. Of the talks I did go to, there was a lot of interesting work presented including Alena Denisova on 1st vs. 3rd person perspectives and immersion, Rodrigo Vicencio-Moreira on techniques for player balancing in FPS games, Daniel Johnson and Lennart Nacke on characteristics of MOBA gameplay, Peta Wyeth on differences between playing cooperative games with avatars (people) and agents (AI characters) and Sauvik Das on comparing linear and open world game structures.


I particularly enjoyed Melodie Vidal's talk about The Royal Corgi, a game that uses eye tracking as a mechanic (see video below). Basically, you play a character in medieval England who wants to gain favour in the royal court by becoming a trainer to the King's corgi and you have to convince other characters in the game that you are worthy of the job - and where you look will matter as some want you to look them in the eye (but not at their wife) and others expect deference and a lowered gaze... The idea seemed quite novel, where eye tracking was able offer an additional channel of communication and I was particularly interested in some of the strong reactions the game provoked.

Chris Preist also gave a really good talk on using gameplay as an extrinsic motivator for learning, in this case as a way to encourage teenagers to revise for their Mathematics GCSE exams. They adopted an approach based on free-to-play games in a game that was like Clash of Clans where instead of having to make micro-payments to get resources and speed up the game, the students had to take a revision test. The students were allowed to play the game when they liked over three weeks and the findings indicated that those in the game condition improved significantly more those in the quiz only and control conditions - plus, the game condition students spent more time on the revision quiz than the quiz only group. Further, the qualitative data suggested it was at the expense of their normal gaming time. While there are some potential issues to consider - it could be argued that revision is not the same as having to learn new content, and it's not clear whether an intrinsic game could lead to larger learning gains or whether this approach would sustain revision over longer periods of time (see below) - but all in all it came across as a relatively simple way to get students to do more revision, which, in the authors words, is already "associated with the extrinsic motivation of passing an exam"! 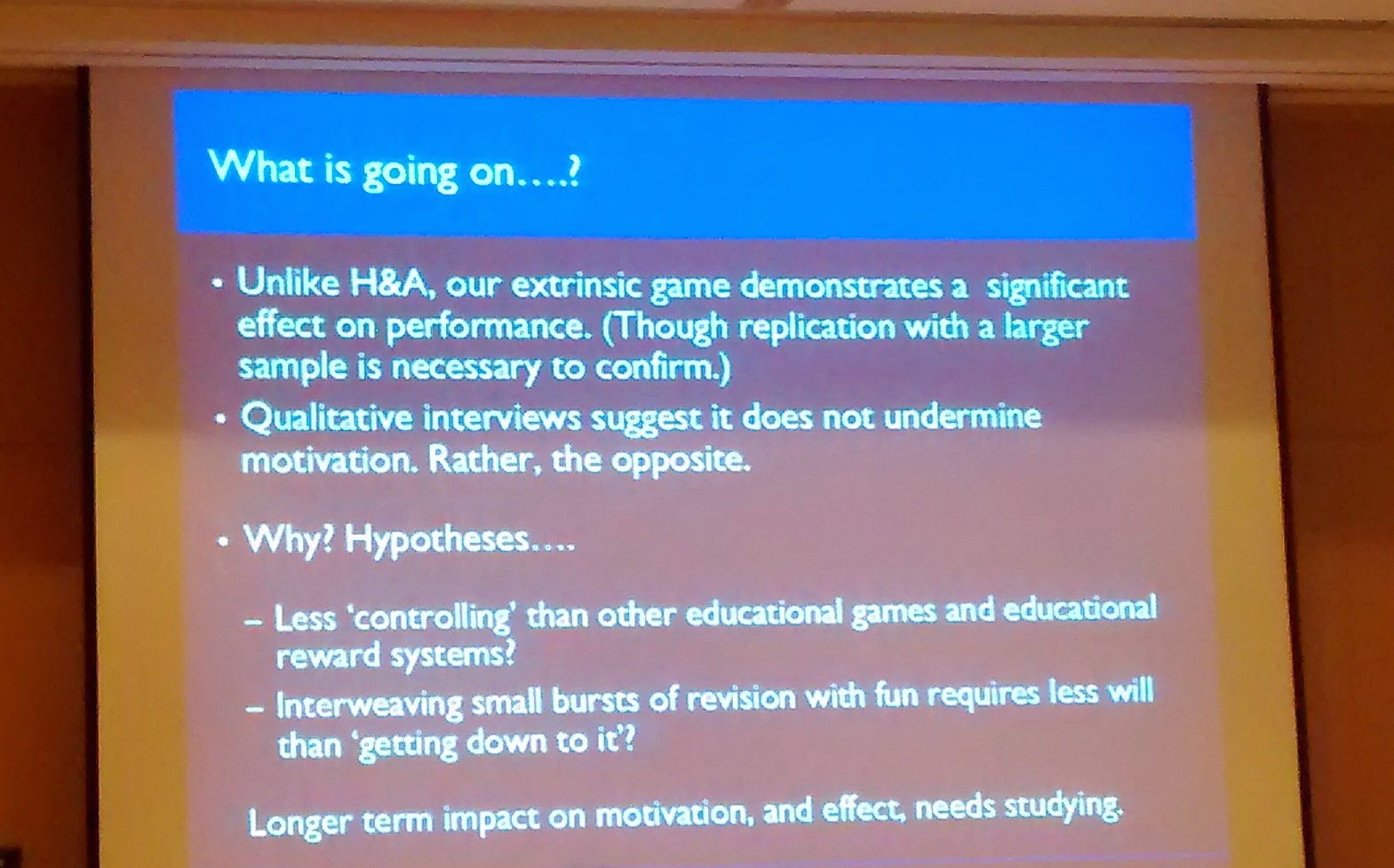 With respect to the rest of the conference, the game competition has got me thinking a lot more about reflection so I made sure to go along to other talks that I thought might be relevant. Some of the highlights include Geraldine Fitzpatrick considering reflection in relation to food waste and highlighting the emotional dimension of the process (something which I'm not sure if always discussed), Eric Baumer introducing conceptual dimension of reflective informatics (relating to breakdown, inquiry, and transformation), and Jeffrey Bardzell highlighting how research through design can contribute to knowledge (through invoking experiences rather than representing reality). I'm getting quite intrigued by critical design but I do feel like I haven't quite got my head around it yet, so while I missed the talk, so I've put Pierce et al's paper on Expanding and Refining Design and Criticality in HCI on my reading list as well.

I also enjoyed Ben Kirman and Shaun Lawson's talk that presented the quantification of pets as a case study that, through speculative design fiction, was essentially a critique of the quantified tracking movement. Besides getting a man in a dog suit to walk on stage, they presented a number of speculative design fictions, such as a dog collar that can tell you whether your dog is happy or sad and a way to track cat movements in gardens through their microchips (see quantifiedpet.com for more details!), which they presented to focus groups consisting of pet owners an animal behaviour experts. While the owners mostly really liked the ideas behind the designs as they wanted to understand their pets more, the experts raised important concerns about the scientific basis of these technologies and how they might actually undermine the bond between animals and humans - particularly since that bond at least partially relies on human beings being able to interpret complex animal behaviour. So there was lots of food for thought here in relation to both trying to quantify pretty much everything but also in terms of using design fictions within research.


To close the conference we had Psy as the final keynote speaker but while he gave a rather humble, honest and engaging talk about the explosion of Gangnam Style, and the conference centre was in the Gangnam district, I'm not entirely sure it had much to do with HCI... In general though CHI gave me lots to think about (and to read up on!) and Seoul was a great city to visit - I'm glad I made sure I had a little extra time to explore :-) 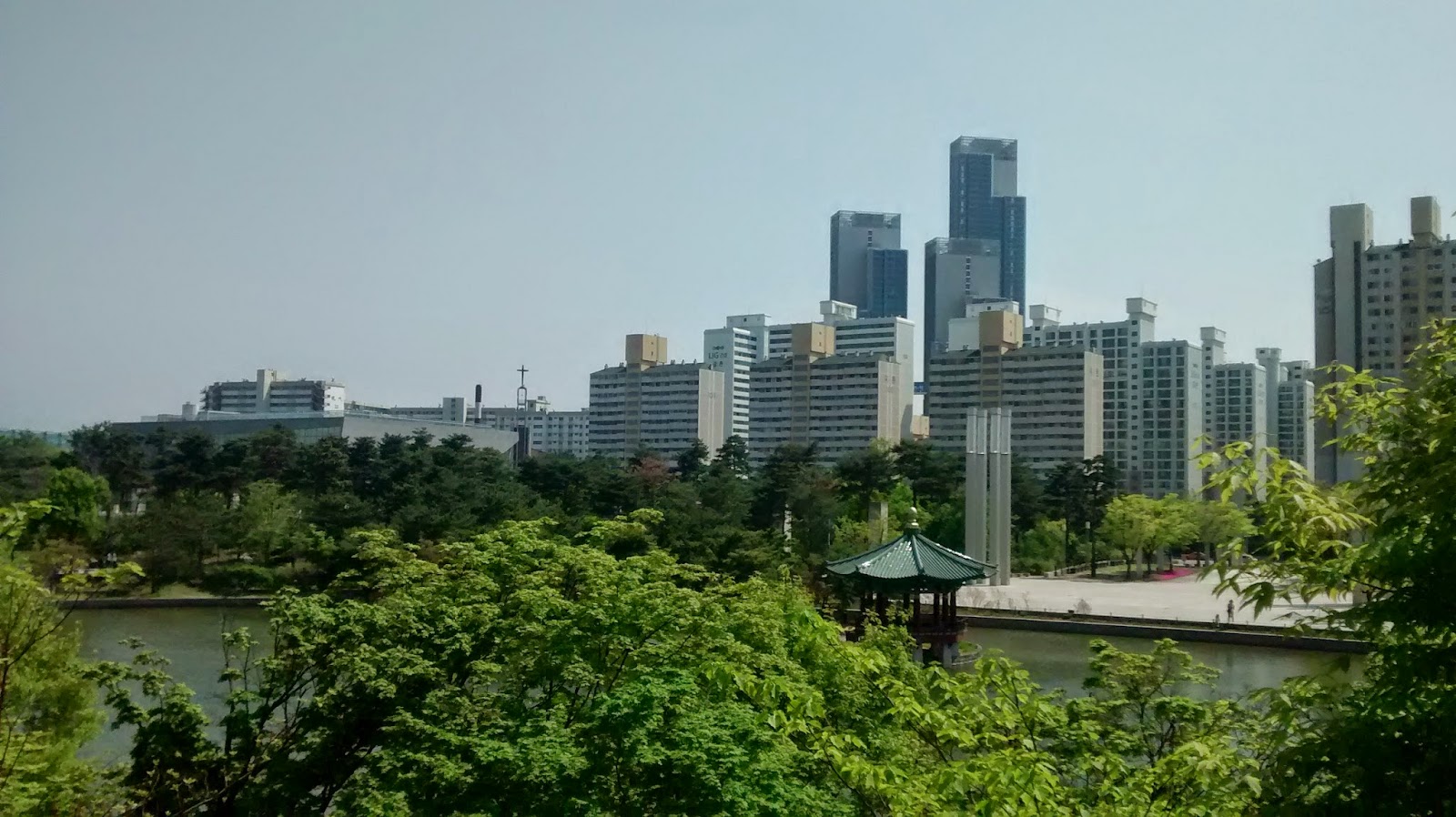 View from the National Museum of Korea

Posted by Jo Iacovides at 13:03 No comments: