Failing in Games at Aarhus University

Last month I was invited to present at the Aarhus University's Interacting Minds mini-conference on "Failing and Confusion in Games and Gaming" along with Jesper Juul, Dennis Ramirez and Charlotte Janasson. Thanks to Andreas Lieberoth for the invite and organising a seriously interesting day :-)

Mine was the final talk of the day, where I presented some of my PhD research on Investigating Game-play: Are Breakdowns in Action and Understanding Detrimental to Involvement? (see pic below). You can find my slides here. I'm waiting to hear back about a journal paper we put together on the findings but in the meantime you can check out my DiGRA paper on why I did not find physiological data to be useful for identifying breakdowns and breakthroughs in game-play. My main argument was that action and understanding breakdowns will contribute to involvement when the player feels responsible for overcoming them but that they will decrease involvement if they take too long to overcome or have major consequences e.g. a loss of progress. There was some interesting discussion in the Q&A afterwards around defining involvement, whether "positive engagement" is a helpful term, the importance of triangulation and how we can avoid players getting into "negative cycles" where breakdowns don't lead to breakthroughs. While I think my work can help explain when certain breakdowns are likely to disrupt involvement, I think there is still plenty of scope to consider how and why some players are able to avoid these negative cycles and others don't. 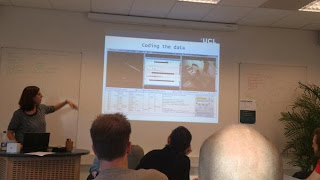 (Thanks to Andreas Lieberoth for the twitpic)

In terms of the other presentations, I was glad to hear more about some of Andreas' initial work on Quantum Moves (a citizen science game) where they investigated player motivations e.g. in terms of fear of failing i.e. trying to avoid looking bad or achieving mastery challenges. While they chose a different focus, there is definitely some overlap with some work I presented at CHI this year in relation to the Citizen Cyberlab project, looking at why people chose to play citizen science games. I'm definitely looking forward to Andreas visiting next term so we can get into some more discussion about our research.

Jesper then kicked off the main talks by discussing failure in games (he's also written a book about the topic called the Art of Failure). Amusingly, he got different people in the audience to try out Super Hexagon and China Miner - I think I lasted about 10 seconds in the latter! Juul argued that while failure can be a source of learning, it's still an unpleasant experience and pointed out that there is a bit of a paradox going on here - normally we want to succeed but when we play games we seem to be seeking out experiences where we will fail (at least part of the time). I wonder though about how you define failure? I don't think all breakdowns are necessarily failures, often they are part of the challenge, or quickly overcome, whereas the word failure seems to indicate something more serious.