At the beginning of the month CHI Play took place in London, and I think I've just about recovered :-) The papers should be accessible to the public for a whole year from here so make sure to check them out. Anna Cox and Paul Cairns chaired the conference, while I served as local arrangements chair - while there were probably a few challenging moments along the way, it was all worth it in the end. I also learnt an awful lot and promise to never take conference organisation for granted again!

The conference kicked off the workshops on Sunday, where I helped run "The false dichotomy between positive and negative affect in gameplay", co-organised with Max Birk, Regan Mandryk and Dan Johnson. The workshop came out a discussion we had earlier in the year at CHI2015 about the lack of nuance around the concept of negative affect within gameplay experiences. We had a great mix of participants and some intense discussions about why we engage in gameplay we don't always enjoy and how the gameplay experience is often about a mix of emotion - whether this results from engaging in darker themes and/or overcoming failure and frustration. And we got through an awful lot of post-its (below) :-) We're hoping to continue developing ideas around this theme but in the meantime you can find the submissions to the workshop here - thanks to Sharon Steinemann, Elisa Mekler, Stefan Rank, Carina Westling and Fraser Allison for their thoughtful contributions! 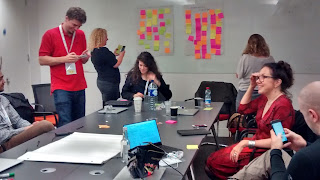 At the main conference, in the pretty impressive venue "The Light at Euston", I presented our paper Removing the HUD: The impact of non-diegetic game elements and expertise on player involvement (Iacovides, I., Cox, A., Kennedy, R., Cairns, P., and Jennett, C.). There has been some previous work on looking at game interfaces and diegesis but not a lot of empirical work examining exactly how different types of elements actually influence the player experience. If you're not sure about the distinction between diegetic/non-diegetic check out this very helpful video :-) Our findings suggest that the removal of non-diegetic elements, such as the heads-up display (which usually isn't part of the game world), was able to influence immersion in expert players through increasing their cognitive involvement i.e. attention and sense of control.We only looked a single-player FPS game though so there is lots of scope to extend work in this area to look at particular types of non-diegetic/diegetic game elements and how they influence involvement across a whole whole range of contexts. 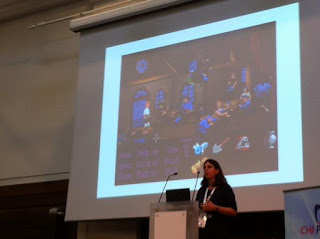 (photo from @elisamekler)
The session I was in at the start of the conference had really interesting talks from Dan about how different types of social play relate to wellbeing, Max on how self-esteem relates to gameplay experiences, while Alena Denisova presented work which found that the placebo effect also applies to games - if you tell people that the game they are playing has adaptive AI (even though it doesn't), they find the game more immersive as a result...  There were so many great talks over the course of the conference, some of the others I particularly enjoyed included Tom Cole making a distinction between functional and emotional challenge in games, David Zendle presenting research which suggested - despite media concerns - that higher graphical fidelity actually decreases players access to aggressive concepts while amore abstract version of the same game increased access; Peta Wyeth discussing flow during individual and cooperative gameplay (when playing the very cute Droppit - see below); Vero Vanden Abeele reminding us that not all games are equal and quality matters in game-based assessment; Jason Bowey talk about the ways in which leaderboards can be manipulated to influence the player experience (positively and negatively); Mike Sheinin discussabout fatigue and skill development in the rather fun small based exertion game Jelly Pollo; while I think Alexandra Samper-Martinez and colleagues at the University of Lincoln have carried out the longest social network game ethnography (3 years) that I'm aware of! I was also impressed by Pryce Davis who was presenting a paper he wasn't actually an author on because his colleagues couldn't make it - the research led to some interesting insights on games that teach programming to young students and employing gender oriented cultural forms. 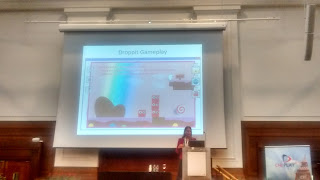 In addition, I was intrigued by the work Fraser presented on how players respond to different types of voice interaction - the fact that some uses of voice command in games are more diegetic e.g. shouting "charge!" when playing Ryse: Son of Rome and others less so e.g. shouting "show map" at the screen in Tomb Raider, may be one way to explain why players preferred some forms of voice interaction over others. Admittedly this doesn't apply to all the examples mentioned e.g. Fifa14, but there could be scope here to think more about what roles players take on - and perhaps jump between - in each of these games in relation to how they interpret the commands they are giving.

Another particular highlight for me was Sharon's talk on increasing donating behaviour through a game for change.The work focused on Darfur is Dying and looked at how presentation mode (text, text with pictures, game) and level of interactivity (no-interaction e.g. reading or recording, interaction e.g. text with choices, gameplay) influenced donating behaviour. They found that while there were no differences for presentation mode, the interactive gameplay version was most likely to increase donations. I liked this work partly because it provides evidence that can games for change can make a difference compared to other media but also because the authors found that appreciation (rather than enjoyment) mediated donation behaviour. So while participants did enjoy the interactive conditions more, the increased donations were due to how thought-provoking or meaningful they found they experience. This seems to build on a growing area of serious experience in games, something which we contributed to earlier in the year. It's a direction I'm keen to explore more so I'll be making sure to look at the scales they used and keep an eye out for future work! 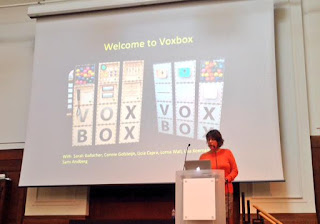 In addition, we had a great mix of excellent keynote speakers who covered a range of topics. The conference started with Mark Barlet from AbleGamers who provided lots of insight into the experiences of disablied gamers and how games can help improve quality of life. He also pointed a the Includification site as a useful resource for game designers. On the second day, Yvonne Rogers from UCLIC  gave a great overview of the work she has been involved in which adopts a playful approach, often involving physical computing systems such as the VoxBox questionnaire system (above), to engage people and communities in different ways. Jo Twist from Ukie then ended the conference with an overview of the state of the UK games industry - it's great to know someone who is as passionate as she is about games is a champion for the industry. Speaking of which, we also had some really good industry talks and I particularly appreciated how Heather Stark from Kinran who not only engaged with the conference throughout by asking thoughtful questions but in her presentation reflected on the relationship between academia and industry, as well on the liminal zone between experience design and product management. 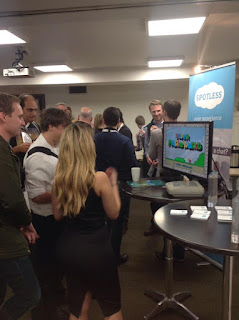 On top of all that, it wouldn't have been right if we didn't have some actual games to play at the conference and this year we were spoilt for choice! At the Light, one of our sponsors, Spotless ran a game competition where people needed to achieve the highest score in the Super MarioWorld on an old school NES (above) for different prizes, while Microsoft set up a comfortable play area for attendees to play a range of Xbox One titles during the breaks. We also had further games as part of the Come out and play track, including Sacred Harvest, where you use the Playstation Move controller to appease the gods in various rituals, and Taphobos, which is described as "an immersive coffin experience" i.e. it's a two player games that involves one of you putting on an Occulus Rift and getting in an actual coffin... 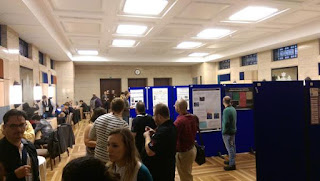 
There was also the evening reception at Senate House (above), which hosted both the work-in-progress posters and the student game design competition entries. Charlene and I managed to get around most of the games, which were just as impressive as last year :-) CHI Plague ran throughout the conference where, through QR code scans, teams of "earthlings" and "aliens" competed to protect their ranks by forming social connections at the conference. Some of the other entries I particularly enjoyed were Matsya (a simple yet beautiful game inspired by the Hindu Flood Myth) who won runner-up, Alaska Steve (where you use the Occulus Rift to look ahead and neutralise obstacles in the environment before the main character gets to them) and Talk about Sex (a multiplayer mobile phone game that encourages young people - and quite a few academics! - to engage in discussions around sex and intimacy). The very entertaining Beam Me 'Round Scottie won first place, as well as the people's choice award (below) - it's a two player game where one of you controls the main character, a captain on a Star Trek style away mission and the second is the engineer helps you out by supporting you (e.g. providing a shield wall to protect from attacks).  In terms of the posters, I wish I'd had more time to go round and see more of them but I did have particularly good discussion with Carlos Mauricio Castaño Diaz about his work on how hypothetico-deductive reasoning skills develops in MOBAs. I think there are some potential parallels here with previous studies we've done on player strategies, while in general it's great to see more research that looks at how people learn through play. 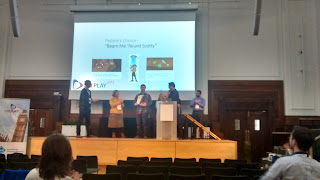 All in all, the conference and the reception were a lot of fun and it was great to find out about so much interesting work that is going on in the area. Thanks to Anna, Paul and all the organisers for making it a fantastic conference - I'm already looking forward to CHIPLAY 2016 in Austin next year :-)